France, 1909 - Around 1908 most designers preferred the biplane configuration. The Antoinette was one of the first monoplanes of its time. It was developed from the Gastambide-Mengin monoplane of 1908. The plane's power source was the already famous four cylinder Antoinette engine, a powerful, yet fragile and vulnerable motor, designed and constructed by Léon Levasseur. The Antoinette was a special appearance with its long slender wooden fuselage of triangular section (with wooden diagonal bracing) and pylon-braced multispar wings (with innumerable light built-up ribs, false ribs and false spars). The shock absorbing undercarriage was centrally mounted and had a skid up front. The original Antoinette had a propeller built of oval aluminum blades, riveted to a steel shaft. Ferdinand Ferber designed the controls, consisting of a left side mounted wheel for ailerons (or warping) and rudder, a right side mounted wheel for elevator, two small wheels in front of the pilot for engine control and a foot pedal with the ignition switch. Flown by Hubert Latham it knew disaster and fame ... the popular Latham failed twice while attempting to cross the English Channel, but set several records in this beautiful aeroplane in the years before World War I.
Almost every Antoinette looks different because of the many improvements made during the period the nine known subtypes were produced. The model represents the Antoinette VII used by the Dutch aviator Gijs Küller who demonstrated it in the Dutch East Indies in 1911. It was an Antoinette with extended wings and original stabilizer, a 70 hp ENV engine and a wooden propeller. 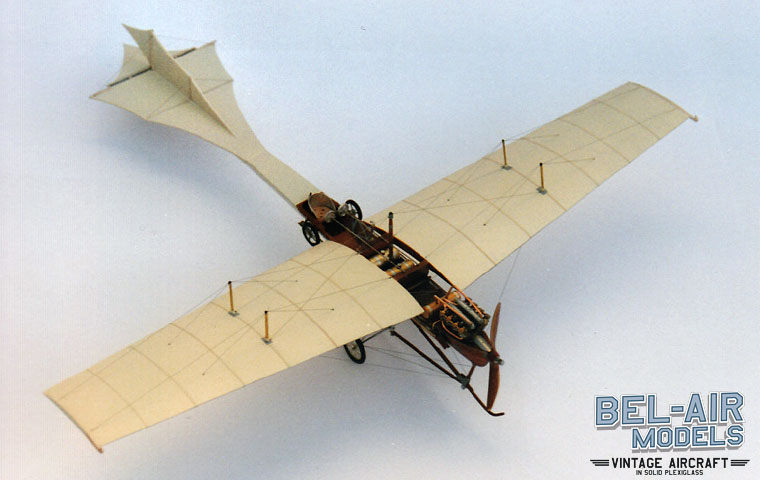